Canadian Premieres of the hyper-violent, feature-length animated horror film TO YOUR LAST DEATH; the very witchy debut horror feature from Panama DIABLO ROJO (PTY); and the explosive action-horror-exploitation parody BULLETS OF JUSTICE are among the Hamilton festival’s First Wave of selections.


Hamilton, Jan 6, 2020 – The Hexploitation Film Festival will be celebrating is 11th season starting February 20-22 headlined by this first wave of feature film selections.

The festival’s full lineup of shorts will be announced later in January. In the meantime, the Hexploitation Film Festival is thrilled to unveil its seven feature film official selections, along with a very special after-party event featuring the world premiere performance of horror rock group Sematary Spawn. 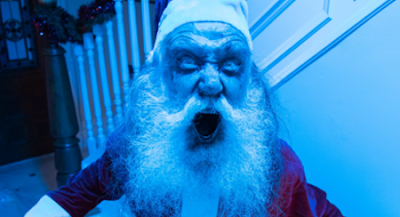 Opening the first night of the festival, the Hexploitation Film Festival will debut the Canadian Premiere of DEATHCEMBER: the ultimate Advent Horror Anthology Movie. Christmas may be over, but this holiday-themed horror anthology is a merry gift of thrills, chills, and kills for any time of the year. Producer Dominic Saxl unites over 24 international directors such as Ruggero Deodato (CANNIBAL HOLOCAUST), Rémi Fréchette (MONTREAL DEAD END), Pollyanna McIntosh (star of THE WOMAN), and Lucky McKee (THE WOMAN, MAY, ALL CHEERLEADERS DIE) with performers like Barbara Crampton (RE-ANIMATOR, FROM BEYOND), Sean Bridgers (DEADWOOD), Johnny Vivash (CHARISMATA, BOOK OF MONSTERS), Barbara Magnolfi (Dario Argento’s SUSPIRIA) and AJ Bowen (YOU’RE NEXT) to deliver a stocking hung by the fireplace with scares. DEATHCEMBER is a diabolically delightful treat for fans of everything from black comedy to outright splatter gore.

TO YOUR LAST DEATH: FEATURE LENGTH ANIMATED HORROR WITH A TIME TRAVEL TWIST GOES TO THE EXTREME 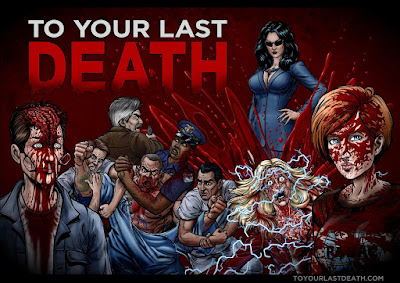 In 2016, the Hexploitation Film Festival hosted the Hamilton premiere of NOVA SEED (a completely hand-animated 2D sci-fi adventure), and this year we continue to uncover ground-breaking animation with the Canadian Premiere of Jason Axinn’s hyperviolent sci-fi/horror survival film TO YOUR LEAST DEATH. After emerging as the sole survivor in a deadly revenge game set up by her wealthy industrialist father (voiced by Ray Wise of ROBOCOP and TWIN PEAKS), Miriam receives an offer from a supernatural entity (DEADPOOL and FIREFLY actress Morena Baccarin) to go back in time and try again. Now, Miriam must survive both her father’s bloodlust and the extra-dimensional Gamemaster’s everchanging rules to save her siblings as she relives the worst night of her life.  TO YOUR LAST DEATH also stars the powerhouse vocal talents of Bill Moseley (HOUSE OF 1000 CORPSES, TEXAS CHAINSAW MASSACRE 2), Dani Lennon (THE LOVE WITCH), and the legendary William Shatner (STAR TREK). Combining the gruesome violence of SAW with the time travel of GROUNDHOG'S DAY and HAPPY DEATH DAY 2 U, TO YOUR LAST DEATH is a pulse-pounding and visually vibrant fresh new entry into the genre of horror and adult animation. 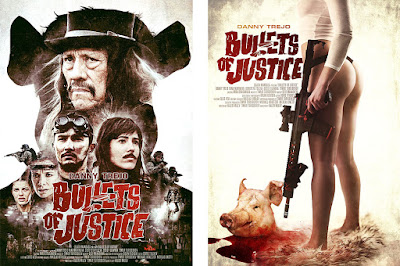 During World War III, the American government initiates a secret project to create super soldiers by crossbreeding human beings with pigs. 25 years later, the world is a post-apocalyptic wasteland in which human/pig hybrids called "Muzzles" dominate the top of the food chain by eating and farming humans like animals. Rob Justice, an ex-bounty hunter working for the last line of human resistance leads a high-octane mission to destroy them all in BULLETS OF JUSTICE, a ludicrous satire of action and horror movie tropes. Helmed by Valeri Milev, the director of such horror/exploitation fare as the zombie actioner CODE RED (2013) and the notorious WRONG TURN 6 (2014), BULLETS OF JUSTICE is a go-for-broke, wall-to-wall horror/sci-fi/exploitation extravaganza that parodies everything excessive, everything questionable, and everything crowd pleasing about 80s action films and Michael Bay movies. Without a doubt it's the year's most raucous action-horror-exploitation mashup offering so much comedic carnage you will smell the gun-smoke. Featuring cult film favourite Danny Trejo (MACHETE, FROM DUSK TILL DAWN) in a supporting role! 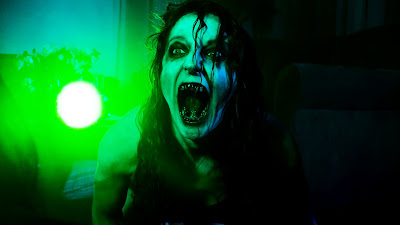 The perfect Midnight Movie mix of gory, gross-out horror comedy and excessive nudity, SLAUGHTERHOUSE SLUMBER PARTY (Canadian Premiere) is American writer/director Dustin Mills's ultimate lover letter to all fringe and psychotronic film-making. What starts as a debauched annual slumber party for a tight knit group of gal pals becomes a fight for their lives when supernatural evil threatens to destroy the world--and even worse, ruin the one night of the year the ladies get to have a nude pillow fight. Trapped by magic, surrounded by evil, and very underdressed, will they survive the night? Or will this slumber party become a slaughterhouse? Fusing the sensibilities of horror comedies like EVIL DEAD II with direct-to-video exploitation, SLAUGHTERHOUSE SLUMBER PARTY will screen in the festival’s coveted and very popular Midnight Movie slot.

In Panama City (abbrev. PTY), a bus driver, his assistant, and two cops falls victim to a mysterious spell and end up lost in the Jungles of Chiriquí where they will have to survive from the creatures of the night, with only the old bus (one of the city's fabled Diablo Rojo aka. Red Devil buses) as refuge. The debut film from Panama director Sol Moreno, DIABLO ROJO (PTY) is a trip to the depths of the unknown that captures the vibrant culture of Panama City and explores the traditional folk monsters of Panama's cultural interior: witches and demons which have been passed down in tales for generations by oral tradition and appear for the first time on film in what is being billed as Panama's first horror film. DIABLO ROJO (Canadian Premiere) offers plentiful practical special effects and a beautiful score composed by maestro Ricardo Risco, assistant director of the Panama Symphony Orchestra. 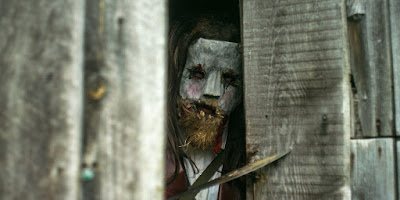 Ontario-based filmmaker Justin Harding (a two-time HXFF award winner for his shorts KOOKIE and LATCHED), brings to Hamilton his gripping and grisly feature film debut MAKING MONSTERS, which he co-directed with collaborator Rob Brunner. Tim Loden (BLOODLINES, VANTASTIC) stars as Christian Brand, a celebrity YouTuber known for his highly popular scare prank channel where is wife Allison (Alana Elmer) is the somewhat reluctant victim/star. When an old friend of Christian's offers to have them stay over at his rural place (a church that's been converted into a home and movie makeup studio), Christian and Allison agree to join him; however, once they arrive, things don't feel right. Christian didn't tell Allison his friend was a monster makeup artist and his studio would be full of gross, ghoulish masks and terrifying figures. It all starts to feel like a prank scare setup, especially when Allison starts to see things she can't explain in the corner of dark rooms and out the corner of her eyes. Is Christian setting her up for the scare of all scares, or is something more sinister afoot? Delivering solid frights, slasher-like suspense, and surprising twists, MAKING MONSTERS is also a meta-commentary on why we like to be scared and scare others, and to what extent that behavior is ultimately unhealthy for society. 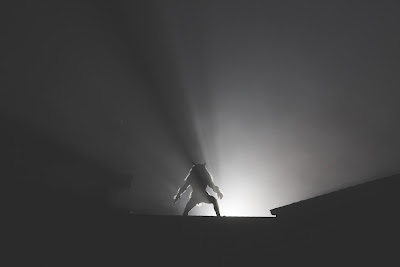 At a lavish launch party for a new Werewolf-themed gaming app, all the media bigwigs are in attendance, but things go sideways when guests turn up murdered in the same fashion as depicted in the game. Mass paranoia erupts among the survivors as they believe the killer is more beast than man. Now, the remaining survivors must work together to survive the night and uncover the true identify of the monstrous murderer...under a full a moon. Filmed in Ontario, HUNTER’S MOON features a fully practical werewolf suit and gory special makeup effects designed and created by Hamilton's own Carlos Henriques (The Butcher Shop). As the body count rises, a cast of accomplished young and upcoming actors -- Steven Morana (WHISKEY BUSINESS, THREE CHORDS FROM THE TRUTH), Holly Deveaux (THE MIST, MUTANT WORLD), Ari Millen (ORPHAN BLACK) -- share the screen with veteran Canadian thespians like Colm Feore (THE CHRONICLES OF RIDDICK, THOR) and Art Hindle (THE BROOD, INVASION OF THE BODY SNATCHERS, BLACK CHRISTMAS), all of whom play their parts in unraveling the shocking mystery of this hairy whodunit. Winner: Best Special Effects: 2019 Spooky Empire Horror Film Festival 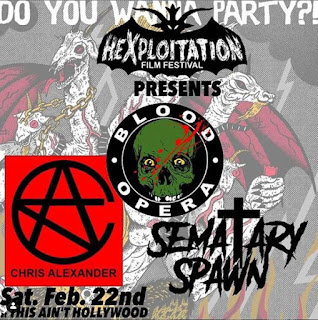 Hamilton-based horror-rock for soundtracks since 2017. Songs featured in Lycanimator, Creature From Cannibal Creek, Slimoids, Exorcism of the Dead and many more!

Alexander is the former editor-in-chief (and current columnist) for FANGORIA as well as the editor and co-founder of cult film magazine DELIRIUM. He is the writer, director and composer of the films BLOOD FOR IRINA, QUEEN OF BLOOD, BLOOD DYNASTY, FEMALE WEREWOLF and NECROPOLIS: LEGION (produced for Full Moon Features). As a musician he has released the albums MUSIC FOR MURDER (Giallo Disco Records), BLUE EYES OF THE BROKEN DOLL (Future City Records) and THEY DRINK YOUR BLOOD. Alexander - along with drummer David Bertrand - will bring his live performance of psychedelic, post-industrial cinematic synth-rock to the Hexploitation stage. Get ready for a dark, heavy and trippy amalgam of vintage analog John Carpenter ambience and organ-fueled Goblin groove with an experimental edge.


Festival Passes are now on Sale, and the full lineup of shorts will be announced in mid-January.

The Hexploitation Film Festival returns to the Staircase Café Theatre (27 Dundurn St. N) February 20 -22, followed by an after-party of horror rock featuring Chris Alexander, Blood Opera, and the world premiere of Sematary Spawn at This Ain’t Hollywood (345 James St N)
Posted by HexFilmFest at 8:30 AM