When a celebrity couple famed for their YouTube scare-prank channel are invited to a friend’s converted church in the countryside for a weekend getaway, a series of startling events unfold that spiral them into an inexplicable nightmare.

The less you know going in to MAKING MONSTERS, the better, as you'll want to experience its surprises and twists first-hand. What we can safely tell you is the film stars Tim Loden (BLOODLINES, VANTASTIC) as Christian Brand, a celebrity YouTuber known for his highly popular scare prank channel where is wife Allison (Alana Elmer) is the somewhat reluctant victim/star. Christian is pushing 40, and his wife is ready to start a family, so she tries to persuade him to give up all the likes and shares garnered by his viral ranking career for bigger and better things, not to mention her own peace of mind that he won't be waiting around every corner to frighten the hell out of her for the amusement of the internet. When an old friend of Christian's offers to have them stay over at his rural place (a church that's been converted into a home and movie makeup studio), Christian and Allison agree to join him and consider putting pranking to the side to focus on family matters. However, once they arrive, things don't feel right. Christian didn't tell Allison his friend was a monster makeup artist and his studio would be full of gross, ghoulish masks and terrifying figures. It all starts to feel like a prank scare setup, especially when Allison starts to see things she can't explain in the corner of dark rooms and out the corner of her eyes. Is Christian setting her up for the scare of all scares, or is something more sinister afoot?

Delivering solid frights, slasher-like suspense, and surprising twists, Making Monsters is also a meta-commentary on why we like to be scared and scare others, and to what extent that behavior is ultimately unhealthy for society. Grounded by a pair of fantastic lead performances, Making Monsters is poised to life up Justin Harding and Richard Brunner as the next Canadian genre filmmaker to keep an eye on. (Aaron Allen) 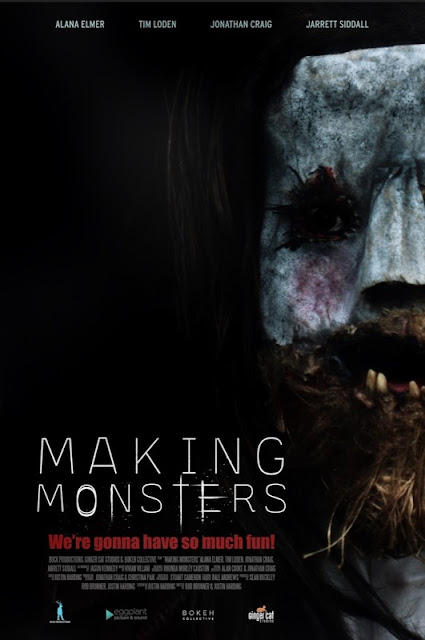