What started as the debauched annual slumber party for a tight knit group of gal pals becomes a fight for their lives when supernatural evil threatens to destroy the world--and even worse, ruin the one night of the year the ladies get to have a nude pillow fight. Trapped by magic, surrounded by evil, and very underdressed, will they survive the night? Or will this slumber party become a slaughterhouse? SLAUGHTERHOUSE SLUMBER PARTY is the unholy hybrid of HARD TO DIE, EVIL DEAD II, and PARKS & REC the world never knew it needed.

If The Slaughterhouse Slumber Party appears on a festival bill near you then rest assured, you are in for a treat. In a film whose content is as zany as its title, director Dustin Mills offers up well-natured slice of provocative horror goodness, where all the ingredients of drive-in horrors are added to into mixture in huge, unapologetic dollops. - Beyond the Gore

“[L]ewd, raunchy, utterly ridiculous, and perfectly happy to be so" - Film Threat

Don't let anyone tell you that you can't make a drive-in style T&A exploitation horror movie and still make it with a lot of heart, because director Dustin Mills has proven them all wrong with SLAUGHTERHOUSE SLUMBER PARTY.

Mills, who is known as much for his zany indie genre films like The Puppet Monster Massacre and Easter Casket as he is for his psychologically disturbing films like Applecart and Her Name Was Torment, brings all his genre expertise to bear on Slaughterhouse Slumber Party, which is described as a mashup of horror comedies like Evil Dead II, trashy T&A exploitation flicks like Hard to Die, and supernatural spook-shows like Poltergeist. In it, an all-female cast gets incredibly and constantly nude during an annual slumber party where a new member to the group opens a gateway to hell and unleashes unspeakable supernatural horror on the group. What ensues is the perfect Midnight Movie mix of gory, gross-out horror comedy, inventive low budget special effects, and enough nudity to make Larry Flint blush.

And despite its extremely exploitative T&A trappings and over the top escalation of increasing disgusting and outrageous jokes and gags, beneath the surface is a passionate celebration of all fringe and psychotronic film-making that's refreshingly non-aggressive in its inversion of stereotypes, LGBTQ+ friendly, and women-positive. The expression "love letter" is overused in film criticism, but I'll be damned if Slaughterhouse Slumberparty is exactly that: a love letter to all horror, cult, and exploitation films and the people who invest their heart and art into making them. We are proud to present Slaughterhouse Slumber Party's Canadian Premiere. (Aaron Allen) 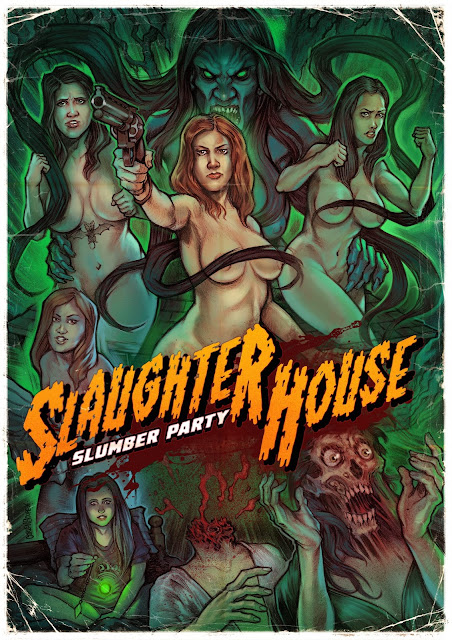