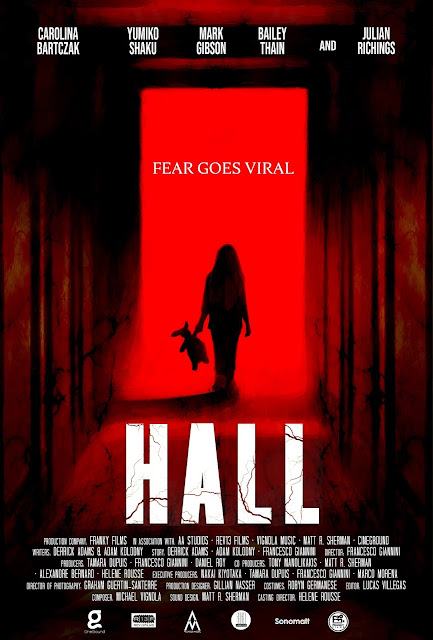 Email info@hexfilmfest.com with HALL CONTEST in the subject line and include the following:

Contest closes at 11:59PM (EDT), Sunday, April 11, 2021
Contest open to residents of Canada only, the age of 18 or over. ONE ENTRY PER POSTAL CODE. MULTIPLE ENTRIES WILL BE DELETED.

One winner will be chosen at random and will receive a download code from iTunes Canada for HALL (https://itunes.apple.com/ca/movie/hall/id1556490624)
SYNOPSIS
When a hotel hallway is ravaged by a mysterious virus, pregnant tourist Naomi is tragically thrust into the fight of her life. Forced to crawl her way past other helpless victims, Naomi crosses paths with Val - a young mother separated from her daughter. While keeping out of sight, Naomi and Val must navigate their way down the stretch of isolated carnage, before they become infected themselves.
Directed by Francesco Giannini
Starring Carolina Bartczak,Yumiko Shaku, Julian Richings
REVIEWS
"Giannini has crafted a riveting, at times teasingly-abstract apocalyptic nightmare primed by domenstic violence horrors and psychological trauma”
– Martyn Conterio, CineVue
“Will have you gnawing your fingernails right down”
– Kat Hughes, The Hollywood News
"Like Steven Soderbergh's 'Contagion' blended with Terry Gilliam's '12 Monkeys,' Hall bears witness to an infernal outbreak from an elevated Ground Zero."
– Anton Bitel, Through The Trees
“Clearly, director Francesco Giannini, despite this being his first foray into the genre, has made the most of his extensive experience in film and created something definitely worthwhile for fans of slow-burn, subdued horror."
– Keri O'Shea, Warped Perspective
“The film's undertones and story come together to create an uncomfortable situation for all involved, including the viewer.”
– Emilie Black, Cinema Crazed
“As well as Giannini, I must credit the pulsing soundtrack by Michael Vignola, and claustrophobic cinematography by Graham Guertin Santerre."
– Alix Turner, Ready Steady Cut
“Timely horror/thriller is beautifully horrifying."
– Ashleigh Gozy, Load And Clear Reviews
Posted by HexFilmFest at 9:16 AM