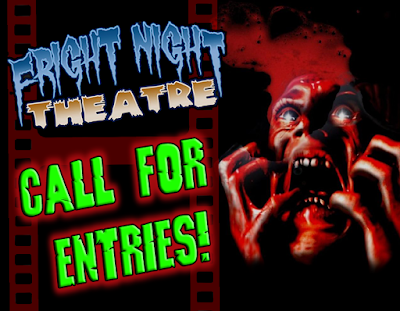 The Fright Night Theatre Film Festival is now accepting short film and feature film submissions for our next competitive festival date: March 11-12, 2016 at the Staircase Theatre in Hamilton, ON (27 Dundurn St. N.). We invite filmmakers with new and exciting horror, cult, and genre films to enter their work into consideration for our 8th annual season.

SUBMITTING FILMMAKERS - MARCH 2016 FESTIVAL: All films officially entered by our final deadline of February 6, 2016 will be watched by our Selection Committee by February 10, 2016. All submitting filmmakers, both shorts and features, will be notified by email with our final programming decision update, letting you know if your film has been programmed for screening at our March 11-12, 2016 or not. At each festival, our Selection Committee will choose 4 feature films and approximately 15-20 short films, all of which are eligible to win both Audience Choice and Selection Committee awards.

SUBMISSION GUIDELINES AND DOCUMENTS AFTER THE BREAK

The FNTFF accepts unreleased Canadian and International films of feature and short length in the horror/cult genre (including but not limited to horror-fantasy, horror-scifi, horror-comedy, etc.)
All FNTFF screenings are curated and all submissions will be fully considered by the FNTFF selection team. Films selected to screen at the FNTFF are eligible for selection committee awards and audience choice awards.

For the purposes of eligibility, Fright Night Theatre uses the following definitions:

Entrants will be notified by email if their work has been selected for the festival run to which they have applied.

If selected, the entrant grants the Fright Night Theatre Film Festival the right to utilize publicity materials related to the production (e.g. press kits, posters, stills, etc.) for promotional purposes, and to broadcast or screen clips / trailers of a maximum of five minutes.

No screeners or application materials will be returned. Do not send film prints, master tapes or other originals.

To submit your film for consideration, you must complete either:

A.)  RECOMMENDED: Submit your film electronically via Filmfreeway.com
https://filmfreeway.com/festival/FrightNightTheatre

B.)  Downloadable, complete, and email us the official Fright Night Theatre Film Festival submission form. Entrants will be sent an invoice for the submission fee via Paypal. Films will not be entered into consideration until payment is received in full.

Submission guidelines for the FNTFF are subject to change. The FNTFF reserves the right to rule on all issues not expressly covered in these guidelines.
Posted by Fright Night Theatre at 11:04 AM