Before Suspiria, Italian horror-master Dario Argento created DEEP RED. Also titled Profondo Rosso and The Hatchet Murders, DEEP RED is held up as one of the finest giallo films ever created. This September, we celebrate Dario Argento's contributions to horror with a one night only screening of his giallo masterpiece. 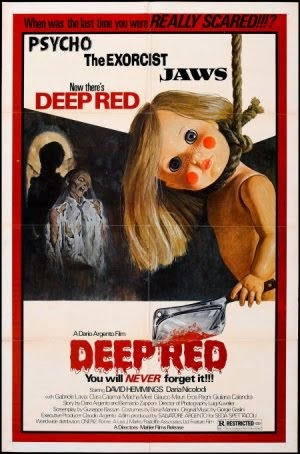 A musician (David Hemmings) witnesses the murder of a famous psychic and then teams up with a feisty reporter (Daria Nicolodi) to find the killer while evading attempts on their lives by an unseen and black-gloved murderer bent on keeping a dark secret buried. Throw in creepy dolls, a roving killer POV, and a classic score by Italian prog-rock group GOBLIN to round out this seminal 1975 giallo film, considered by many to be a masterpiece of the genre.