Alexandra reluctantly tags along for Slasher Sleepout, an extreme event that is part camping trip, part haunted house, and part escape room. But when the fun turns deadly, Alex has to play the game if she wants to make it out alive.

"The perfect successor to Scream" - Nerdly

"It's a twisty, winding road ... that will taunt you right up until the last moments" - Dread Central

Everyone's looking for the next big scare. Roller coasters, amusement park haunted houses, and drive-in B-movies just don't cut it in today's world. But what happens when you go too far for fictional thrills and put your life in the wrong hands? Will you be able to tell the difference between fantasy and reality before they both turn fatal?

In RUIN ME, a group of thrill-seeking campers face this very question when they sign up for SLASHER SLEEP OUT -- an extreme live-action horror experience in the woods. They are promised the chance to live out a real-life horror movie scenario in which murderous lunatics stalk the forests and the campers must solve a series of puzzles, follow vital clues, and dodge deadly encounters until only one final camper "survives." Slasher Sleepout promises a traumatic, holds-no-barred experience but it's all make believe. All in good fun. That is until Alexandra and her boyfriend enter the game and soon realize that things seem a little too real and begin to wonder if they game they are playing is actually playing them.

In the tradition of meta-horror movies like Scream and featuring an outstanding cast of up-and-coming stars, RUIN ME is a loving homage to classic horror slashers like Friday the 13th but put through a screamfest of twists and turns that will have you guessing at every corner. It's part SAW, part THE GAME, and entirely its own thrilling and terrifying blend of humour and horror. (Aaron Allen) 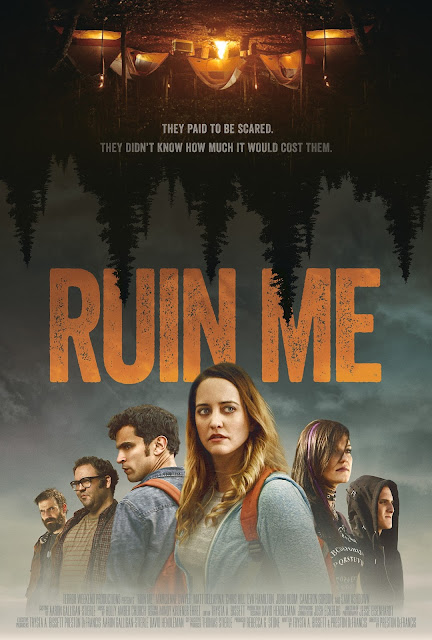