In Volume 2 of Troma's two-part event film RETURN TO NUKE'EM HIGH, Lauren and Chrissy, two lesbian lovers, must face and defeat not only the mutant glee-club Cretins who have taken over Tromaville High but also the corrupt and evil forces of the Tromorganic Foodstuffs Conglomerate which threatens to destroy Tromaville... and the world!

"If you love to laugh and don’t mind over-the-top gratuitous humor of all kinds, this is the film for you." - Yardbaker

YOU GOTTA SEE THIS! Praise for VOLUME 1


"People were cheering, yelling, laughing, jumping out of their seats, and just contributing wholeheartedly to the onscreen festivities" - Interview Magazine

“Lloyd Kaufman returns to the director's chair with a hearty blast of Troma-branded schlock.” - Variety

From the company that brought you THE TOXIC AVENGER, POULTRYGEIST, and CANNIBAL: THE MUSICAL comes the movie that exploded into controversy at the 2017 Cannes Film Festival with the harassment of Lloyd Kaufman and the Troma team by French police!

If you thought Return to Nuke'em High (Volume 1) was insane, you ain't seen nothing yet! In his triumphant follow-up, director Lloyd Kaufman delivers the Troma film to end all Troma films: a schizophrenic and attention deficit disorder tornado of blood, guts, boobs, monsters, slime, farts, meta-textual jokes, social satire, gross-out gags, b-movie special effects, and hilarious go-for-broke parodic pot-shots at all staples of right-wing corporate America! Kaufman and the Troma team take a decided stand against Hollywood's Disney-fied focus group corporate movie culture by crafting a film that is intentionally combative, messy, crude, and deliciously bonkers -- the exact opposite of the safe and polished popcorn entertainment clogging up movie screens across North America.  Leave your good taste and moral sensibilities at the door, but keep those punk rock Troma flags waving loud and proud. (Aaron Allen) 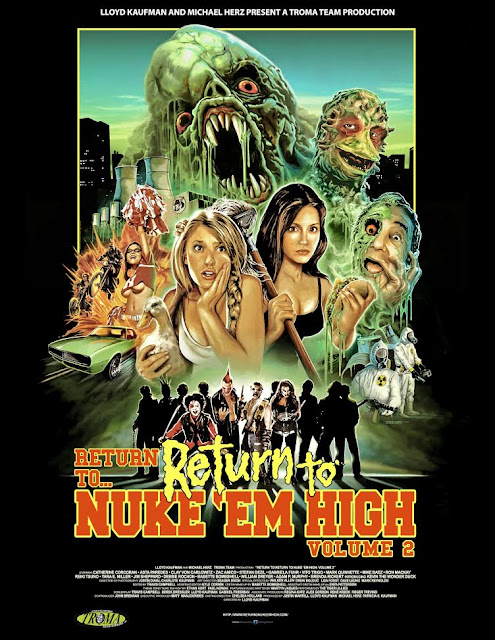