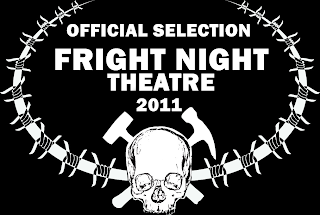 When a girl is abducted by a vampire, a legendary bounty hunter is hired to bring her back in this violent and monster-filled anime. Director: Yoshiaki Kawajiri
---

MASKHEAD tells the depraved tale of Syl and Maddie, lesbian filmmakers who produce fetish videos with a deadly twist. Each sickening video concludes with somebody getting tortured and killed snuff movie style by a hulking, bandaged brute in a bizarre mask that covers his deformed face. This is “Maskhead,” Syl and Maddie’s star. With the help of their sociopath associate, The Cowboy, the demented crew begins work on their next series of Maskhead videos. Directors: Scott Swan and Fred Vogel.
---

A weekend camping trip turns into a frantic fight against the supernatural when an ancient demon and a fearsome female warrior bring their eternal battle into the present day. Director: Andrew Cymek
---

"Damn you, Sharktopus!" A half-shark, half-octopus engineered by the military creates a whole lot of terror in Mexico while a scientist who helped created it tries to capture/kill it. Director: Declan O'Brien.
---

In a futuristic city sharply divided between the working class and the city planners, the son of the city's mastermind falls in love with a working class prophet who predicts the coming of a savior to mediate their differences. Director: Fritz Lang.
---

A reporter and a psychic race to close the Gates of Hell after the suicide of a clergyman caused them to open, allowing the dead to rise from the grave. Director: Lucio Fulci.
---

Deckard, a bladerunner, has to track down and terminate four replicants who hijacked a ship in space and have returned to Earth seeking their maker. Director: Ridley Scott.
---

Camp counselors are stalked and murdered by an unknown assailant while trying to reopen a summer camp that was the site of a child's drowning. Director: Sean S. Cunningham.
---

A secret military project endangers Neo-Tokyo when it turns a biker gang member into a rampaging psionic psychopath that only two kids and a group of psionics can stop. Director: Katsuhiro Ohtomo.
---

In the wake of the end of the world, a family of four desperately tries to survive. Taking to the forest, they soon discover the other survivors may be the least of their worries. Director: Justin McConnell.
---

A group of people are trapped in a large movie theater in West Berlin that is infected by ravenous demons who proceed to kill and posses the humans one-by-one, thereby multiplying their numbers. Director: Lamberto Bava.
---

After losing his high school sweetheart in a horrific housefire, Josh Higgins' life tumbles into a depressing mix of insomnia and poor choices. After taking seemingly harmless sleeping pill, Josh is transported back the idyllic life he once lost. As the walls of his own psychosis slowly start to close in around him, Josh must race to save himself, Kate and the parallel life that he's vowed to never lose again. Director: Chad Archibald.
---

A supernatural horror film that explores the dark worlds of mental illness, incest, revenge and death. We follow Tanya as she searches for the mother she has never met - Susan who gave her up for dead after being abused by her own father. Tanya returns from the dead to confront and possess Susan with all her deepest fears and desires, sending Susan into a state of madness and gore filled retribution. Director: David Blyth.
---


IT! THE TERROR FROM BEYOND SPACE (USA) Trailer

In this 1958 sci-fi classic, the first manned expedition to Mars is decimated by an unknown life form...which stows away on the rescue ship. Director: Edward L. Cahn.
---

Seven months have passed since the dead took over. Many cities and states have been abandoned and left to die. Several self sufficient hunting groups have been established to take on the threat in a war aptly referred to as the 'War on Dead'. Jillian Hurst, a former news writer and amateur documentarian, has set out to make a pro-war propaganda film to support the W.O.D. She joins up with a pack of renegade hunters known infamously to North America as 'the deadheads'. The moral dynamics and hardships of fighting in a war against the undead are told from several different perspectives. Director: Reese Eveneshen.
---

Screened November 01, 2011 in partership with the Hamilton Film Festival

Tricia's husband Daniel has been missing for seven years. Her younger sister Callie comes to live with her as the pressure mounts to finally declare him 'dead in absentia.' As Tricia sifts through the wreckage and tries to move on with her life, Callie finds herself drawn to an ominous tunnel near the house. As she begins to link it to other mysterious disappearances, it becomes clear that Daniel's presumed death might be anything but 'natural.' The ancient force at work in the tunnel might have set its sights on Callie and Tricia ... and Daniel might be suffering a fate far worse than death in its grasp. Director: Mike Flanagan.