Rebellious high school senior Johnny Grissom is murdered while on a drunken joyride. Soon, Johnny's classmates turn up dead, murdered by an unknown assailant. Johnny's best friend Eric begins to suspect Johnny has returned from the grave to wreak havoc on those who wronged him.

"Johnny Gruesome is a lot of things, but most important of them all, is that it is so much FUN! This film is a perfect blend of gore, jump scares, gut-wrenching violence…and so much to laugh about!" - Tranwreck'd Society

"... a quickly paced and fun supernatural revenge flick that has a great soundtrack, excellent makeup and perfectly cast characters with personalities." - Morbidly Beautiful


Gregory Lamberson (KILLER RACK, SLIME CITY MASSACRE) will be in attendance to bring his adaptation of his award-winning novel JOHNNY GRUESOME to the HXFF for its Canadian Premiere. JOHNNY GRUESOME stars Anthony De La Torre (Young Jack Sparrow in PIRATES OF THE CARIBBEAN) and Michael De Lorenzo (NEW YORK UNDERCOVER).

While on a drunken joy-ride with his friends, rebel rocker badass Johnny Grissom is murdered. After those involved cover up his death to make it look like an accident, Johnny's classmates begin to die. Johnny's best friend Eric begins to suspect Johnny has -- in classic horror comic book style -- returned from the grave to punish those who wronged him....and anyone else he feels is in his way.

We are thrilled to welcome back Gregory Lamberson to the HXFF for the Canadian debut of his long-awaited slice of undead revenge. Lamberson is no stranger to the HXFF. In 2015 we hosted the Canadian Premiere of his cult comedy KILLER RACK and he was a special commentator at our 2017 screening of RAWHEAD REX. Expect a lively post-film Q&A about the making of the film, how the film landed an original song by Robby Takac of the Goo Goo Dolls, and the long road from novel to screen. (Aaron Allen) 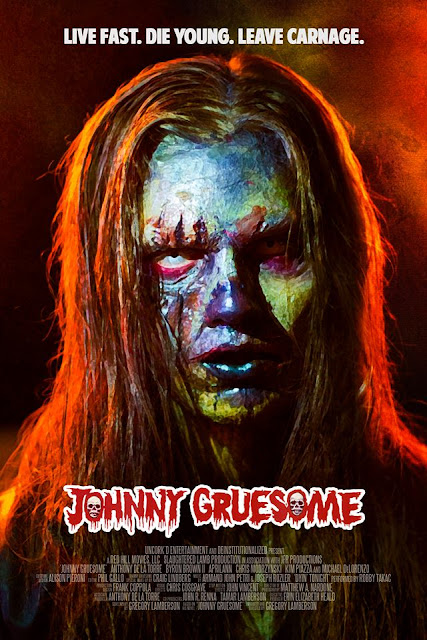