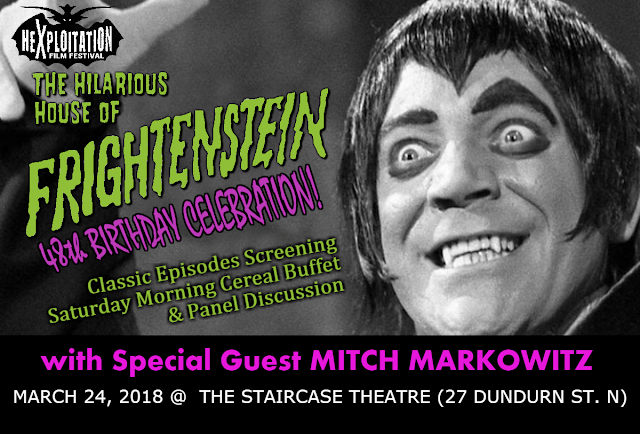 Take a trip back, waaaay back, to gory, gory Transylvania, home of Count Frightenstein, Igor, the Wolfman, Grizelda, the Librarian, Super Hippy and the whole host of kooky creeps that populated the classic Canadian children's television series The Hilarious House of Frightenstein. Conceived in 1970, produced by CHCH-TV in Hamilton, and aired in 1971, the Hilarious House of Frightenstein was syndicated both in Canada and across the world, sparking the imaginations of monster kids everywhere (including those on our festival team!). The Hexploitation Film Festival invites you and your family to join us on March 24th for a free Saturday Morning Cereal Buffet as we celebrate this historic made-in-Hamilton series with a special screening of two episodes of the show followed by a panel discussion about the history and legacy of the show with Mitch Markowitz (co-star and co-producer) and other special guests to be announced. It'll be fiendishly funny fun for the whole family. 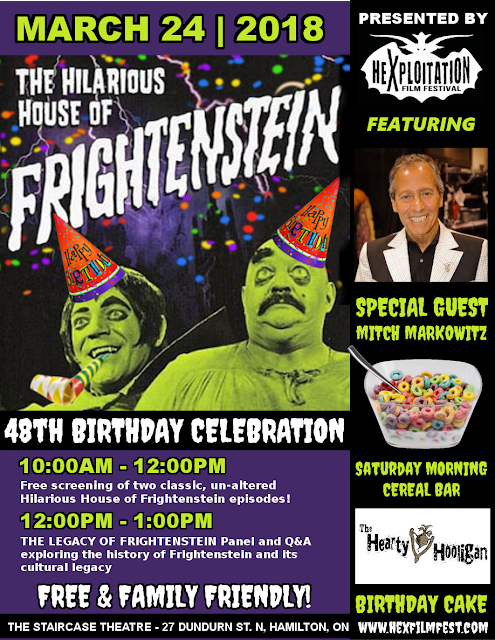 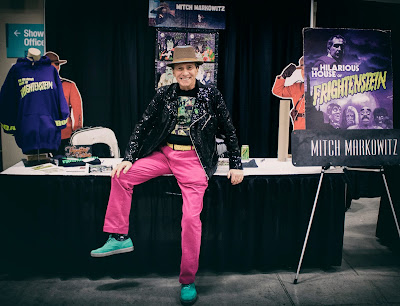 In the early 70's,  Mitch Markowitz co-produced and co-starred as the Super Hippy character with Vincent Price and Billy Van in the iconic Hilarious House of Frightenstein. The series was originally produced for Hamilton, Ontario's CHCH TV in the early 70's who in turn syndicated the show across Canada, the U.S. and abroad. The Hilarious House of Frightenstein is the longest running kids' TV show in Canadian history with three generations of fans in countries as far afield as Spain, Australia & Norway.  Having enjoyed a successful 35 year career in the new home industry, Mitch has been responsible for the marketing and sales of thousands of new homes on both sides of the border for a number of major international developers. More recently Mitch co-starred with Academy Award winner Vanessa Redgrave in Rue Morgue Cinema's feature film, The Last Will and Testament of Rosalind Leigh  and co-stared in the award winning film HUMAN CATTLE produced by The Butcher Shop Special FX and Rabid Dog Films, winning Best Short Film and Best Special Effects at the 2017 Shock Stock Film Festival. Other television credits include numerous appearances on Paranormal Investigators, Spirits and Spice & Niagara's Most Haunted

Mitch is currently involved in negotiations in regards to the original Hilarious House of Frightenstein series airing again in Canada and the U.S. as well as exploring other markets worldwide, the possibility of producing a reboot (new version of the series) an animated version and a designated YouTube channel.

He was involved as Executive Producer in a series of four vinyl albums featuring the audio components of the Frightenstein series which sold out in short order and is about to commence work executive producing a Hilarious House of Frightenstein radio drama featuring an international cast of actors. There's a comic book/magazine in the works, a set of HHOF bobble heads and special brand of HHOF coffee about to be released by Deadly Grounds Coffee Canada. 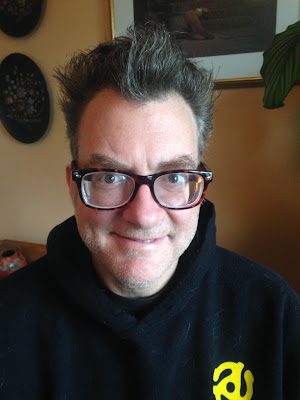 Stacey Case interviewed his idol Billy Van about the Hilarious House Of Frightenstein in 1995 for his punk zine Rivet. Creating the Frightenstein Fiend Club, a ten-year obsession culminated in 2005's Frightenstein Fest, an incredible sold out event in Toronto. As drummer in the Tijuana Bibles, the band was hired to rewrite the Wolfman's theme song for television broadcast. The song is featured on the new Frightenstein vinyl album! Stacey is currently figuring out what to do with the manuscript for Billy Van's unpublished autobiography. 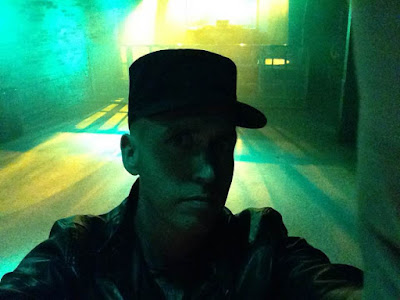 Chris Alexander is an internationally published film critic, writer, editor, music composer and filmmaker. From 2009 – 2015 he served as the editor-in-chief of the legendary horror film magazine FANGORIA and its sister periodical GOREZONE as well as the creator of the specialty line of FANGORIA LEGENDS magazines. He is the editor and co-founder of cult film magazine DELIRIUM and the co-founder and publisher of FANTASM Presents magazine and its offshoot publications. Alexander has also edited and published several licensed magazines for the iconic rock band KISS and was an editor at the film news website ComingSoon.net. Prior to this, he was a critic and columnist for RUE MORGUE magazine and a writer and critic for The Toronto Star’s METRO newspaper. As a filmmaker he is the writer, director and composer of the vampire film BLOOD FOR IRINA, its sequels QUEEN OF BLOOD and BLOOD DYNASTY, the erotic surrealist drama FEMALE WEREWOLF and the psychological science fiction film SPACE VAMPIRE. As a musician he has released the albums MUSIC FOR MURDER (Giallo Disco Records) and BLUE EYES OF THE BROKEN DOLL (Future City Records) and has composed the music for Joseph O’Brien’s horror film THE DEVIL’S MILE. More on Alexander’s film and music work can be found at ChrisAlexanderOnline.com and select film writings can be found at Alexanderonfilm.com