The baddest mofo with the killer afro -- Bloodsucka Jones (Preston Gant) -- and his gorgeous sidekick Vanessa must help a couple of idiots fight an army of zombies unleashed by an evil group of vampires.

In 2013, we hosted the World Premiere of a little indie horror comedy called Bloodsucka Jones about a guy named David who discovers that his girlfriend is a vampire, so he enlists the help legendary badass monster-killer Bloodsucka Jones to fight off an army of evil preppy fangers from taking over the town. It was a silly and delightfully hair-brained romp -- the Anchorman of horror comedies. And the audience wanted more!

Now, director and writer Justin Armao is back with the Canadian Premiere of the anticipated sequel. Bloodsucka Jones is once again called upon but this time he must train David to fight a horde of flesh-hungry zombies. It's bigger. It's sillier. It's delightfully stupider. More gorgeous girls! More graphic violence! More giggles and guffas! Bloodsucka Jones vs. The Creeping Death is a rapid-fire, free-wheeling exercise in slapstick, goofball comedy destined for cult film status. (Aaron Allen) 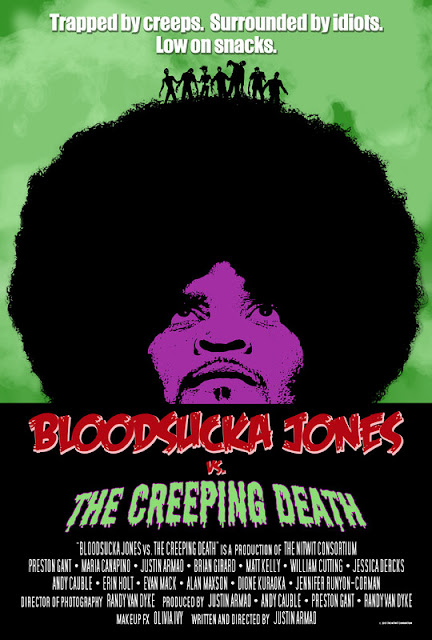