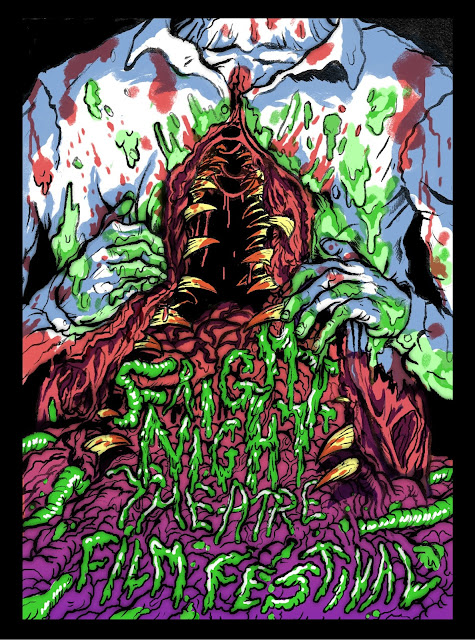 
Fright fans, behold our full schedule for the Fall 2016 edition of the Fright Night Theatre Film Festival. With 7 features and 21 shorts over the course of two days of horror, cult, exploitation, and genre mayhem, the FNTFF offers thrills, chills, and kills for all tastes. Order your festival passes or advance tickets now before they sell out.

Be the first in Canada to experience this spine-tingling thriller from the UK that's Wicker Man meets Roesemary's Baby. After the untimely death of a relative, a young woman must return to her ancestral home in Ireland where she soon discovers that the suspicious townsfolk are harboring a dark and ancient secret. Trailer

Screens with short film THE BIRCH

A program of six acclaimed horror shorts that showcase the monsters that haunt our nightmares, stalk our streets, and lurk deep within the hearts of all of us.

A man is captured by a family of feral, wood-dwelling cannibals who want to make him one of their tribe.

A rag-tag group of cops tasked with transporting an unstoppable killing machine must survive a hellish pit stop: a cursed town where the dead rise from their graves!

Beneath the decay of a dying world lives the Mad Doctor Mindskull. Using the planet’s power of creation he has created the ultimate Weapon. Can mankind find a way to stop this Evil before time runs out? The only answer lies within the Nova Seed.

A second block of unique horror shorts that will thrill you, chill you, and perhaps even kill you with nightmare creatures, creepy kids, gangster ghosts, and ultra violence.


A genre-defying mixture of horror, sci-fi, myth, mystery and thrills told through a collection of found footage videos that document the existence of ghosts, spirits, demons and more from the paranormal world.


Zombie action in the Alps: a group of young snowboarders is stuck at a remote mountain ski resort where an all-night aprés-ski party soon turns into a hellish nightmare of undead mayhem.


Teenage friends out for Spring Break get unexpectedly detoured to an isolated motel where a deadly STD virus now runs rampant, turning those infected into the living dead.

Screens with short film INTO THE MUD