At Alex’s farewell party with his friends, three psychopaths descend on the house with the intent to kidnap and torture them. Their goal: to broadcast the violence via a controversial, uncensored streaming platform called FRAMED.

"Framed is a no holds barred, gory, visceral dive into how far we’ll go to get recognition online" - The Scariest Things

"It confronts you with the question, how much of your soul are you willing to give away for fame, and how much have you already given someone else" - Modern Horrors

The internet is a scary place. Rather than become  a font of understanding and communication, the internet has emboldened our sickest fantasies, basest nature, and our maddening lust for attention but also anonymous cruelty. And we all log on, follow like, share, subscribe, click, and up vote the madness every day. But what if we take things way, way too far? Farther than we have already gone?

That is the concept of the ultra-violent and gruesome FRAMED, in which an anonymous and uncensored Youtube-like app allows users to live stream any and all acts they wish; of course, the ones that get the most views happen to be the most violent and depraved. Enter a trio of psychopaths on a self-appointed mission to stream the most debased social media broadcast this side of the dark web, and they take as their stars an unsuspecting group of friends gathered for a farewell party. What follows is a harrowing, brutal home invasion assault that is not for the weak of stomach or faint of heart. Some of the violence in FRAMED even had our hard-core horror film programmers covering their eyes.

FRAMED combines the home invasion horror genre of The Strangers with the rise of social media influence that has forever altered our culture. It provides a dark glimpse into a future fueled by primal instincts in a society abandoned to the excesses of viral celebrity.

In FRAMED, terror is trending. Will you click? (Aaron Allen) 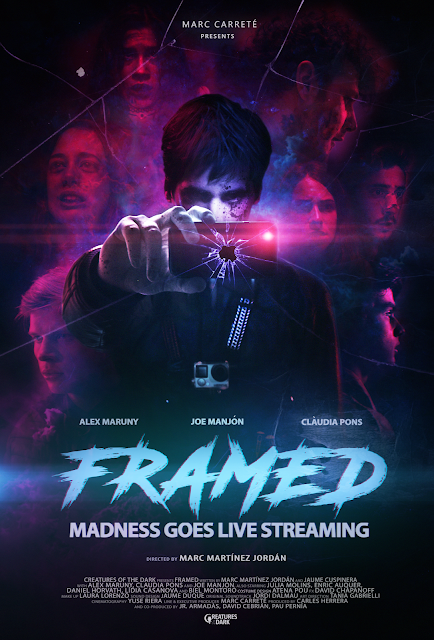